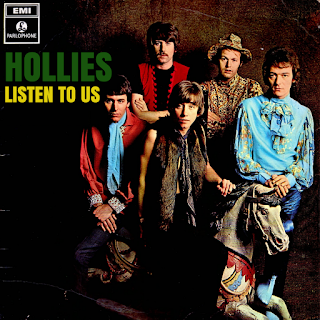 By 1968, The Hollies, who were one of the best bands of the British Invasion, were in some bad times: their latest psychedelic, Nash-led albums had only been moderate successes, and the "King Midas in Reverse" single flopped. While Nash, the only member of the group that had ever tried LSD or other drugs, wanted to carry on with the psychedelia and experimentation, the other group members wanted to continue with their teenybopper image, causing numerous fights between members. After recording about 10 songs for singles and a possible follow up to "Butterfly", Nash finally had enough of the band and joined Stephen Stills and Graham Nash in CSN, taking with him two songs he had written for the Hollies (namely "Marrakesh Express" and "Lady of the Island"). The rest of the group, however, recruited rhythm guitarist and singer Terry Sylvester and soldiered on with a Dylan covers album. All that was released at the time from the sessions were two singles ("Jennifer Eccles" and "Listen to Me") and their respective b-sides. So, comes the doubt: what if they had finished the last album Graham Nash recorded with them?

From the material available to craft the album, we have three singles (the two mentioned above plus their earlier, late-'67 "King Midas In Reverse") and their b-sides, along with the two CSN songs, "...Express" and "Lady of the Island", and the outtakes released in the "Clarke, Hicks & Nash Years: The Complete Hollies April 1963 – October 1968" we have about enough to create an album: 14 songs, but one of them will be scrapped due to being absolutely horrible (yes, you guessed it, the horribly corny orchestral version of Dylan's "Blowing in the Wind"), while the other tunes, fortunately, are great. The album would be titled "Listen to Us", a bad pun with one of the singles, and the cover is a mockup of their "Hollies' Greatest" cover, released in the same year, made by me, where I just replaced the text with the album's name. So, now we have a nice batch of thirteen songs to sequence into a good farewell-album for Nash, and a worthy follow-up to their magnum opus Butterfly, so let's see what can be done with them:

Side A starts with "Open Your Eyes", originally a b-side, it is a nice little tune, nice enough to start the album, followed by "Do The Best You Can", an outtake, and the short "Relax", originally unreleased as well. The fourth track on this side is "Everything Is Sunshine", originally the b-side to the King Midas single, and the great "Man With no Expression" follows, along with "Like Every Time Before". The side ends with the great midtempo song "Wings", originally unreleased. One of the best songs Graham Nash ever wrote, "King Midas In Reverse" is followed by the single "Jennifer Eccles", leading to a CSN tune, "Lady of the Island". Due to the fact that they did not record the song, we will have to use the CSN version, but even still it fits pretty well. "Tomorrow When It Comes", a nice psychedelic rocker comes next, being followed by the second and last CSN song, "Marrakesh Express". The Hollies went as far as recording a backing track for this one, but due to the lack of a lead vocal (I heard an attempt at sync with Nash's demo vocal and the instrumental, but it did not work well), we use the released Crosby, Stills & Nash version. Ending the album is the almost title-track, "Listen to Me". Originally a single, it is a more than appropriate ending to the LP.

Compared to their two previous albums, "Evolution" and "Butterfly", it stands as being equally good, with some highlights like "Man With No Expression", the two CSN songs, and "King Midas...", and the fact that the terrible "Blowing In the Wind" wasn't included improves a lot on the album as well! Their singles would be the same as they were in our reality, which is pretty good. Clocking at about 35 minutes, it is a little short, but still, their previous albums had the same length, if not less, so we're fine. Nash's leaving was inevitable, at least to me. There is no way he'd be able to reconcile his more drug-fueled vision and songwriting with the workmanlike and poppier Hollies in the long run, but honestly, it was great while it lasted. But now, at least he has a proper farewell, before he became a third (or a fourth, depending on the era) of one of the best groups in the world, and his original band became a pop group, with hits like "He Ain't Heavy, He's My Brother" giving them much fame and recognition, and it seems as if both sides won in this. But during this era, it seems that all they ever wanted was that we would listen to them.