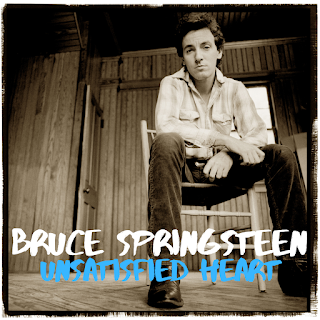 Bruce Springsteen released his sixth album, "Nebraska", in October 1982 through Columbia Records. His first truly solo album, it features Bruce playing all the instruments and was recorded in a single week, from late December 1981 to January 3rd, 1982. Its release came after a couple of frustrating sessions with his group, the E Street Band, who were having some difficulty turning those Dec. '81 demos into a finished product, as well as tracking many other "electric" songs not from the Nebraska tape, as you saw in an earlier reconstruction by yours truly. In a move that is as bold, unpredictable and puzzling as The Boss can sometimes be, he decided he'd simply release the demo tape and shelve those other songs for the time being, with plans to hold further sessions the following year. Before 1982 ended, he also had the time to buy a house in California, and play a couple of gigs as a guest in some New Jersey bars he used to frequent. And as for the album, it sold as little as his management expected it to sell, despite getting rave reviews and critical acclaim.

In January 1983, Bruce moved to L.A., settling in a house equipped with a brand new home studio, which was much more professional and of quality than the cheap Tascam recorder he used to make Nebraska. Now with the ability to record studio-level demos from the comfort of his home, he started recording a new batch of songs in preparation for the E Street sessions that would begin the following May. In just four months, he managed to record some fifteen tracks there, with just the aid of a drum machine and recording all the parts alone. Unlike Nebraska, the arrangements weren't as sparse and much more thought out, with most songs being given keyboards and one or two keyboard parts, actually sounding like a one-man-band. Given the quality of these recordings, Bruce gave serious consideration into either releasing them as a standalone album, just like the album that came before it, or integrating these songs to the May 1982 leftovers. Even though a tracklist for the latter was made, he decided on neither, and shelved almost all of these songs.

Since it would be another year until he could make up his mind on how he would release Nebraska's followup, and 1983 saw virtually no activity from him, we can ask ourselves: what if he had released these L.A. Garage demos as their own album? And to answer such a question, we will need to cull the best 10/12 songs from these pretty prolific sessions, and turn them into a cohesive listening experience, following Bruce's preferences whenever possible. Also, only songs that were started and finished during these early '83 sessions will be considered, with one major exception that will be explained later. And even though this is a solo recording, I do believe he'd take a more "mixed" approach with these songs, as he did with the Tunnel of Love, bringing his bandmembers to make occasional overdubs and finishing touches, about which I'll get into more detail later. Because honestly, this album sounds like a midway point between The River and ToL, which in a way, it is. But not to stretch this out any further, this is what Unsatisfied Heart looks like:

In mid-1983, Springsteen put together a provisional tracklist for an album called Murder Inc, which consisted of 10 out of the 11 main songs from the '82 sessions, plus "Johnny Bye-Bye", and five other tunes earmarked as b-sides. Since those were Bruce's picks from the sessions, we will include all six on the record, which makes our work half-done already! And as for the rest of the tracks, I include a mix of songs he tried-out in the studio later in the year (the title track, "Richfield Whistle", and "My Hometown"), songs that managed to get themselves released ("County Fair", "Shut Out the Light"), and the song I honestly consider to be the highlight of these sessions, the haunting "The Klansman". In all, that gives us 12 songs and forty-odd minutes to work with, and I sequenced the album in a way that it opened with the closest thing we have to a rocker, followed by the title track, and closed with the most "epic" song on the record, followed by the album's only non-demo recording. And filled out the rest with what flowed together well, taking BS's sequence as a basis.

The only real editing work I needed to do was cut out his count-ins, which make sense since these are nothing but demos, but tend to get annoying on repeated listening. Because of that, some of the songs end up having rather abrupt beginnings, which I tried to smooth out as much as possible. And as for the band's additions and sweetening, I can see Max overdubbing drums/percussion to most of the tracks, with the notable exceptions of "The Klansman", "Shut Out the Light", "Johnny Bye Bye" and "Follow that Dream". Roy and Danny could add some piano/organ to most of the more band-like songs, such as a nice piano part on "Richfield Whistle", or organ in "County Fair" and even Gary can add in a couple of different bass parts. Even though we're dealing with some nineteenth generation cassette copies of most of the songs, if you try you can actually hear where their individual parts would go. And considering "Follow that Dream" and "Sugarland" were played live back then, in some cases you don't even have to use your imagination that much!

As for the cover, I tried to go for a The River meets Nebraska kind of look, by combining a photo taken by the same photographer who did the latter, with a similar font to the former. We end up with a 47 minute record, with evenly timed sides and a tracklist that manages to keep things interesting, and less unidimentional than when compared to Nebraska. Sound quality and unfinished state aside, this is  a fantastic collection of songs, capable of rivalling with the albums that came before it and would come after it with ease. Even though it would obviously not become some fantastical blockbuster, this is the kind of album we should've gotten back then, and hopefully will get, with a BITUSA box on the horizon. The only song with something remotely similar to commercial potential here is the title track, so it'll have to be our single. To think that songs as good as "Unsatisfied Heart" and "Richfield Whistle" have not yet been released, and are still better than some artists' whole career! If this is not a testament to Bruce's sheer creativity and unsatisfied spirit, I truly don't know what is.

Sources:
Bruce Springsteen - The Lost Masters [Bootleg collection]
Posted by The Reconstructor at 01:50 No comments: