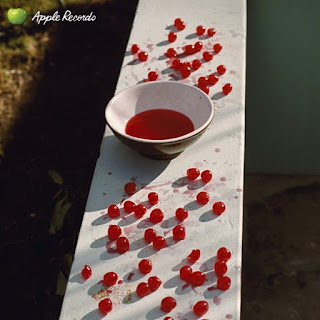 The Beatles' thirteenth and final album, Abbey Road, was released on the 26th of September, 1969, through Apple Records. It was recorded between February and August of the same year, immediately after their failed "Get Back" sessions of January, in which they tried to "strip down" all the complex overdubbed work they had done ever since the Beatles had stopped touring, and go back to a more natural, live sound. Said sessions ended with tensions very high and its album and television special both postponed indefinitely, after George Harrison quitting the band and then returning a few days later, and a couple of attempts of putting an album together by engineer Glyn Johns in February. With all those issues, it's surprising they were in such a good, amicable mood during the sessions for the Abbey Road album, when they reunited with George Martin and went back to their more traditional way of recording, with overdubs and all. That was always justified by all authors and biographers as the group knowing the whole thing was all over and giving it another go, to give the band a proper finale and a deserving farewell. However, that whole narrative started to become questioned when a tape of one of the final Beatles meetings was unveiled this year by Mark Lewisohn.

The meeting, which took place two weeks after the sessions for the album ended in August 20th, had three of the band members (with the exception of Ringo, who was sick and couldn't attend) discussing their plans for the band's next move, including another album and a single, possibly to be released before Christmas. What's more surprising about that is that John, who would famously quit the band only twelve days after that, seems to be the one that's the most interested and adamant about the band's future and his plans for it. He suggests that they divide the material more fairly, with four songs each for John, Paul, and George, and two songs for Ringo, "if he wants them". George is obviously a fan of the idea, and the formula is met with the most resistance by Paul, who responds with “I thought until this album that George’s songs weren’t that good”, and seems uneasy with all those suggestions, being promptly rebutted by George and John. Either way, said tape goes to prove two things we all thought were the truth to be wrong: John's departure wasn't as planned and definitive as it would seem, at first, and they didn't plan for Abbey Road to be their final album from the beginning, and not even after it was finished.

So, what the whole world has been wanting to know ever since the band broke up is: what if they had done as planned and went along with John's idea? Well, how they would have done it is a pretty complicated question and involves a lot of issues, which are better not discussed. Let's just say that Paul received John's idea with more ease and went along with it, and the rest worked out well. However, for our timeline to work, we need to set up some lore first. First of all, for the whole timeline to work, the Get Back album needs to have come out sometime in early 1969, preferably March. The reason for that is that the band had just signed a new deal with Capitol Records for the distribution of their records, and they needed new product for the following year. In our timeline, that would be the Let it Be album, but without that, the commercial need for a new Beatles album would be yet another reason for them to make one last record. And considering things were definitely not as bad as they were at the beginning of the year, by then, I doubt they'd mind it that much. John still releases his solo singles and gets the Plastic Ono Band together, and George is planning to record a solo album late in the year, something he'd been considering since 1968. Also, any and all ideas for a concert or tour are obviously nixed.

For this to not become yet another "internet person puts his favorite solo Beatle songs together and calls it an album", we will have to take a different approach to piece together the Beatles' fourteenth album. And that will be selecting all songs that were either seriously rehearsed by them during the Get Back sessions or before, or were written during the band's existence and presented for consideration. There will be a couple of exceptions to that rule, which will be explained later, but it helps to keep proceedings historically accurate, instead of being yet another playlist. It would have been recorded between January and April 1970, being produced by George Martin, as usual, and recorded in Abbey Road studios, as all other Beatles albums had been. We will mostly keep to the 4-4-4-2 rule, with one exception: Ringo only gets one song. And that's for two reasons, firstly due to time constraints, as the songs are pretty long and 14 songs would be stretching the length a record can store, and that he only really had one good song ready, so why bother giving him two? It would then feature 13 songs, as well as a non-album single, "Maybe I'm Amazed", with Ringo's "Early 1970" as the b-side. Without further ado, here's our tracklist:


First off, we have a couple of songs that despite fitting in with the rules of this reconstruction, will not be included in the album. Those are "Teddy Boy" and "Junk", by Paul, which were already presented to the band on multiple occasions and rejected by all of them. John explicitly said that he thought lesser songs such as Maxwell's Silver Hammer should be given to other artists, and I think that's what would happen to both songs. John's "Look at Me" is a different story, as it is a bit too similar to "Oh My Love", with the latter being the better tune. As for George's many rejects, I only added songs that were seriously considered by the band, and left the rest to fill up his solo record. There are also some songs that break the rules, and those are "That Would Be Something", which despite being written in November 1969, was a favorite of George's, and fills up Paul's fourth spot, as it was empty by then. The single, Maybe I'm Amazed, was also written later, sometime in January, but gets a pass. Ringo's two songs also were written after our stipulated date, but still pass, as they are the only way we'd even have anything from him. The sequencing was lightly based off on Abbey Road's, especially on side one, and mostly on what I thought fit the best together, giving us two sides verging on 24 minutes.

As for the writing dates, most songs date from the Get Back/Let it Be sessions, with a couple of exceptions. Those include Jealous Guy, which was begun as Child of Nature in India, before being rewritten for John's Imagine album, not being recorded for the White Album as it was considered too similar to "Mother Nature's Son". Go figure. "Isn't it a Pity?" dates all the way back to Revolver, and goes a long way showing how neglected George's songwriting was by the rest of the band, from early on. "Let it Down" and "Oh My Love" both date from November 1968, the first being the result of George going to spend Thanksgiving with Dylan and the Band, and the latter written and first demoed when John was moving out from his Kenwood home, following his divorce. Two of John's songs, the aforementioned "Oh My Love" and "Gimme Some Truth", even feature George on guitar, and both George and Ringo guest on each other's songs, giving them even more credibility as Beatles tracks. And although it might seem strange to have "I Me Mine" in here, we have to take into account that the band wouldn't have added it to LIB in our timeline, leaving it as an option for us. And having a song with more than two Beatles on a Beatles record is always a good thing!

As for the arrangements, not much would change on Paul's songs, considering they were pretty stripped down and Beatlesque as they stand. The more obvious changes would be John and George doing the harmonies instead of Linda, maybe some electric guitar by George on "Every Night", and so forth. I could also see the second solo on "Maybe I'm Amazed" being written by Harrison, and John urging McCartney to turn the scat sections of "The Back Seat of My Car" into actual lyrics. As for John, we would have less Spectorized production on his Imagine numbers, and nice George Martin string arrangements being given to those and "Mind Games", as well as much better bass lines and occasional guitar parts, of course. As for George's songs, those would be the ones with the most radical changes, I think, sounding much more like "Something" and "Here Comes the Sun" in terms of production. The horrible Mariachi-like horn sections of "All Things Must Pass", "It Don't Come Easy" and "Let it Down" would be gone, and John and Paul would have a field day on the harmonies, as well as making the bass much more interesting. "Isn't it a Pity?" would obviously be the short version, and all guitars would be handled by him, with no need for Clapton.

I chose the title Falling Rain, from one of the only two verses of "That Would Be Something", as it has a nice ring to it, especially paired with Linda McCartney's picture of the cherries, which I personally think is one of the best covers of all time. A pretty introspective and sometimes dark album, it sounds to me like a midway point between Let it Be's tension and strive, and Abbey Road's more relaxed polishedness, showing a much more mature band, with some lighter moments courtesy of Ringo and Paul. In addition to the "Maybe I'm Amazed" single, I can easily see "Jealous Guy" and "Isn't it a Pity" getting released as a double a-side single, as was the case with "Something" and "Come Together" in 1969. Falling Rain would also signal a return to more concise, song-focused songwriting, after their experimentation with the Abbey Road Medley and its expanded format. It would obviously sell well and be lauded accordingly by the critics, as it really stands well as an album even when collected from solo recordings. We all know we will never know for sure what's the answer to the perennial "what if the Beatles never broke up?" question, but that's really part of why it's so much fun to even wonder in the first place, playing this mind game.