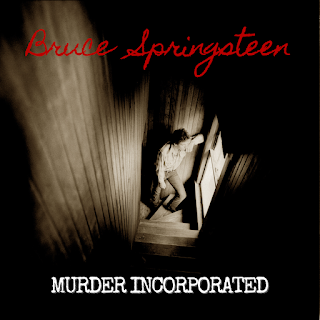 Bruce Springsteen's tour in support of his The River album ended in September 1981, at the Riverfront Coliseum in Cincinnati, Ohio. The year-long tour, which began in early October 1980, was his most successful up to then. It saw him perform his first significant tour outside the USA, touring western Europe in the first half of 1981. This tour also marked a significant growth in his political involvement, in regard to music, with him asking for silence when singing more serious songs, and even covering artists such as Woody Guthrie and Jimmy Cliff, who featured a lot of political messages in their material. So it was only natural that, soon after a time off, he started writing new songs, many of a more political nature. One of them was this lament about a Vietnam veteran, Born in the USA. Along with some fourteen others, it was demoed by Bruce in a four-track recorder in his New Jersey home. All fifteen songs dealt with more "obscure" characters and scenes than his previous songwriting, and featured him alone on acoustic guitar, and occasional harmonica.

And it was those demos that he showed his backing group, the E Street Band, in January 1982 during their first studio sessions together since May 1980. Coming off straight from backing fellow New Jersey singer Gary US Bonds in his newest album, they started learning that material and other songs, in order to record a follow up to The River, at New York's Hit Factory. Among the other songs were some of a more "personal" tone, although still dealing with hardship. All in all, Bruce totaled some 45 new compositions, and they were all recorded, from those early January sessions until late May of the same year. As compared to his previous output, those new recordings were a considerable departure, both in style and content. The production on those tracks, courtesy of manager Jon Landau, band member Steven Van Zandt and BS himself, was much more poppy and accessible, with huge sounding gated reverb-laden drums, and the predominance of synthesizers alongside Springsteen's guitar playing. You could tell that the 80's had gotten to him, so to speak.

But Springsteen wasn't too happy with the way his demo tape songs got treated. He didn't feel the heavy themes and messages conveyed in the lyrics of the songs matched such pop arrangements, and decided to scrap all band versions of those acoustic tunes. Only three of them were kept: "Born in the USA", "Downbound Train", and "Working on the Highway". As for the other twelve, Bruce decided to release them as they were, in those more intimist arrangements. As for those three saved songs, and the rest of the sessions, he then decided to compile an album out of them, to serve as a companion to the acoustic album. In his own words: "I had these two extremely different recording experiences going, I was going to put them out at the same time as a double record. I didn't know what to do." And so, he compiled two acetates, one with each of those "recording experience". The first got released on its own as Nebraska. The second, however, became nothing, and would endure two more years of sessions until half of it was released as Born in the USA in 1984.

So, what you're probably already asking yourself by now: what if he had indeed released both albums as one double LP? First off, we know more or less what both of them would consist of, and as far as the electric album was concerned, it even had a defined tracklist, compiled in May 1982, soon after the end of those early sessions. So our work here won't be that excessive after all. We will basically keep the two pre-defined sequences, with only some slight changes, that will be explained later. The first disc will be the acoustic recordings, with the second disc featuring the band songs. That is most likely the order he would follow, putting the more difficult, less accessible songs first and the poppier band tunes later as a "reward" to his listeners. The album will be titled "Murder Incorporated", as he had created a later compilation in mid-1983 with some of the same songs, and that title fits in well with the themes of the album. And as an album cover, I used the maxi-single cover for the song, released in 1995. Now without any further ado, here is our tracklist:

Bonus tracks:
The Big Payback (The Essential)
Wages of Sin (Tracks)
A Good Man is Hard to Find (Tracks)

We start off alone with Bruce in his Colts Neck home, with side one of Nebraska. Here, we revise it to better reflect the running order of the original Nebraska demo tape, with outtake "The Losin' Kind" being put in "Highway Patrolman"'s place. A fantastic song, it still puzzles me to this day it wasn't included in the original Nebraska album, fitting in lyrically and in instrumentation like a glove. Considering it wasn't released as a b-side or re-recorded later, and that it was recorded in the very same sessions as the rest of the album, we can add it with no great consequences to the album. And on side two, "Highway Patrolman" is slotted in between "My Father's House" and "Reason to Believe", once again restoring the original tape's sequence. This means the once 25+ minute side one is now slightly shorter, and the once 15-minute side two has a proper length as well. Other than that, we add an alternate version of "My Father's House", only found in the Japanese 1985 CD pressing. It features an additional 30-second keyboard coda, which was cut god-knows-why on the regular album. The first half of the album came together pretty easily, I must say!
The electric album, straight from the Power Station in New York, starts off as we are used to, with "Born in the USA", in its regular album version. There are a couple of extended versions of it, but I don't think those would have been used on the album, so the regular one stays. "Murder Incorporated" from the Greatest Hits, follows, being one of the greatest songs from the sessions, and inexplicably left off BITUSA. The next three songs, "Downbound Train", "I'm Going Down" and "Glory Days", are all featured on their regular album versions. The original recording of "Glory Days" featured an edited verse and ran something like 45 seconds longer, with the rest being as it is. We will not include that as that edit dated from the 1982 sessions, and most certainly what Bruce intended to be on the album. The side ends with what was their most common show opener on the 1999 reunion, "My Love Will Not Let You Down" found on the "Tracks" compilation. Also inexplicably left off his 1984 hit album, it's a fantastic song, and makes for a fantastic side closer on Murder Incorporated.

"Working on the Highway", one of the Electric Nebraska songs, open side two of the electric album. Originally titled "Child Bride", it was reworked for the Born in the USA album, and it's that rockabilly-infused version we will use in here. Following is "Darlington County", also from BITUSA, and "Frankie". Dating back to the 1977 Darkness on the Edge of Town sessions, the seven-minute epic is one of the only representatives of the "classic" Springsteen sound in here, and is easily one of the best songs on the album, sourced then again from the Tracks comp. "I'm on Fire", once more from Born in the USA, and the Tracks version of "This Hard Land" finish off the works, with the whole disc clocking at a slightly long 47 minutes, as with the first disc. As bonus tracks, we have the solo recording of "The Big Payback", which was the b-side to "Atlantic City", and two outtakes from the same April/May 1982 sessions that gave us the electric album, "Wages of Sin" and "A Good Man is Hard to Find". Those would be used as b-sides here, being the best session outtakes.

As an album, Murder Incorporated does a pretty good job of portraying where the Boss' mind was at at the time. The first disc is a fantastic representation of his more politicized work, showing the darker side of Reagan-era America, as well as paying tribute to his folk music roots. And the band album does a fantastic job of following the chart success of "The River", as well as being a much better representation of those sessions than BITUSA could ever be. As well as that, they both could easily co-exist without each other, but work much better when paired. One provides more depth to the other, somehow, and that makes listening to the whole affair much more intense. Not bad at all! And finally, it's a great comment on the duality of his persona, separated between a serious singer-songwriter, worried about social issues and focused on folk music, and an MTV-era popstar, with synth-full arrangements and anthemic songs. His second double LP in a row, it probably wouldn't have sold as much as his later blockbuster. But if this is the price to pay, then so be it.