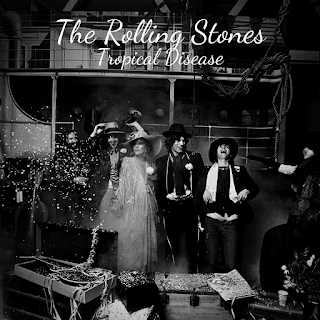 The Rolling Stones released their ninth studio album, Sticky Fingers, in April of 1971 through Rolling Stones Records. It was their first release after leaving Decca Records and firing former manager Allen Klein, and also their first to have guitarist Mick Taylor as a full-time member of the group. They started recording it as far back as December 1969, in Muscle Shoals, Alabama, during a break on their American tour, which yielded three songs: "Brown Sugar", "You Gotta Move" and "Wild Horses". Not bad! The rest of Sticky Fingers was recorded sporadically between March and October of 1970, in London's Olympic Studios. In September of the same year, the Stones played their first European tour in three years, and debuted many of the album's tracks during it, including the aforementioned "Brown Sugar" and "Dead Flowers". Along with the ten tracks that ended up on the finished album, those Olympic sessions also produced demos of songs that would be polished up and finished later, with some fantastic tunes being started during those fruitful sessions.

However, despite the band's prolific nature that year, they would end up not releasing a studio album in 1970, the first time such a thing happened in their career. That would end up happening due to the fact that they were involved in a mess of legal issues with former manager Klein and former label, Decca. As for the former, the band discovered they had signed off the copyrights of all the material they had released so far to ABKCO, and were also forced to give "Brown Sugar" and "Wild Horses" to make matters worse. And so, rather than risk losing the rights to any more songs, they decided to keep them all under wraps until things were settled. Also put on hold were their plans of recording yet another album almost right after that one, as was praxis when it came to the Stones back then, as they had a finished record they couldn't release. They only managed to release it in April 1971, by which time they'd spent a year and a half between starting point and release, with almost half of that time being spent in court rather than in the studio.

Before the album was released, they even managed to tour the UK in March 1971, as a way to properly say goodbye to their British fans. They had to become tax exiles in France and the USA due to some six years of unpaid taxes (courtesy of Allen Klein) and England's absurd taxes. Once in France, they installed their mobile recording unit in Keith's basement that summer and started recording the now legendary Exile on Main Street, which would be finished in December at Sunset Sound, Los Angeles. The infamous double album was made from two clear batches of songs: the half started at Olympic and written during the sessions for Let it Bleed and Sticky Fingers, which they could finally release, and the half written at Nellcôte's horribly ventilated basement in late 1971, which sounded considerably different when compared to the other group of songs. This whole debacle of legal issues and problems made for a double album which was itself two different albums together in a single package, creating what's probably the greatest Stones album of all time.


So, what I ask you is: what if the whole ABKCO issue hadn't happened, and they managed to record the album they wanted to in early 1971? That would obviously mean Sticky Fingers would have to be released sometime after the European Tour, in November 1970, and they would record in London, sometime between January and July of 1971, with the UK tour taking place in August. It will only feature songs known to have been started during the 69/70 period, with one exception which will be explained later. We will also limit our options to songs that were officially released back then, which bars songs such as "Dancing in the Light" from the deluxe version of EOMS and all the period songs from the Metamorphosis album. Considering that most of the songs on the album are pretty short, and the fact that Sticky Fingers was pretty long, at 47 minutes, I felt comfortable making this into a 12 track album, to both match the length of the former, but also to make room for all the great material we have available. Not to stretch this any longer, here's our tracklist:

All Down the Line (Exile on Main Street)

Starting off the proceedings is live staple and workhorse, "All Down the Line", which is the obvious choice when it comes to starting off the album. It was first recorded during the Let it Bleed sessions as an acoustic number, in June 1969, sounding a bit like "Street Fighting Man". By 1970, it had evolved to become the rock and roll tune we all know and love, which means this version of it would sound a hell of a lot like the EOMS version, only with some prominent acoustic guitar, like "Brown Sugar" had from the previous year. Soon after, comes "100 Years Ago", which according to Mick Taylor in a '73 interview, was at least two years old when they recorded it definitely, which makes it fair game in our timeline, adding a touch of R'n'B and Funk to the proceedings. Its arrangement stays largely the same, only being a bit more fast-paced than it was on Goat's Head Soup. As for "Shake Your Hips" its master take was actually recorded during the SF sessions in June 1970, only missing definitive lead vocals and a proper mix, making it an obvious addition to the album.


The downbeat "Let it Loose" follows, being first demoed in May 1969 during the LIB sessions, and also being worked on throughout 1970. Its backing track was done in June 1970 and the song only needed vocals and a proper mix, which means no absurd changes involved. As for "Sweet Virginia", it was fully written in early 1970 and its backing track was recorded back in June 1970, with the vocals and saxophone solo being added in LA, which means it stays the way it is. Closing off side one, as it did in Exile, is "Tumbling Dice". First worked on in April 1970 under the title Good Time Women, which was a bit quicker and had different lyrics, with them only settling on the final lyrics and arrangement in Nellcôte. However, I still think they'd end up with at least pretty similar results to the finished version, if not exactly the same, with a rather slow tempo and gambling lyrics. "Silver Train" was first recorded in October 1970, and was already finished, only missing a couple of lyrics here and there, sounding almost exactly like its GHS counterpart, a great way to kick off side two.


Up next is "Loving Cup", played during their infamous Hyde Park concert in June 1969, also being first recorded that month. The lyrics were all in place, as was most of the arrangement, only slowed down and minus its piano intro, two issues they'd probably correct in the sessions we are discussing. "Hide Your Love" was first worked on in October 1970. A pretty simple song, it would sound almost exactly the same as it does now, but feature shorter solos and be a bit sped up as well, due to the album's time constraints, and the fact that it honestly drags on a bit. Both "Sweet Black Angel" and "Stop Breaking Down" were recorded during the SF sessions, both being a lead vocal and a mix away from being finished, making them natural additions. Speaking of natural additions, "Shine a Light" is the obvious closer for Tropical Disease, being first written way back in 1968 under the name Get a Line on You. By 1970, they had settled on the finished lyrics, but the arrangement would only come with the help of Billy Preston adding a gospel flair to it, which would also happen here.


As for the album title, Tropical Disease was one of the working titles for the EOMS album, and I thought it somehow fit in with the album, especially considering the nature of some of its songs. The album cover comes from an October 1971 photoshoot for Exile's promotional postcards, which honestly looks like a bunch of Europeans disembarking in a South American country in the forties. It's a pretty long album, with both sides hitting the 24-minute mark, and the whole thing makes up for a great listening experience. It's a more concise LP than Exile, and as much of a good listen, especially considering that if you take the second batch of material, you can make an album as good as this one. It would be released sometime in November 1971, with "All Down the Line" and "Shine a Light" acting as it two main singles, and maybe "Tumbling Dice" as a third option, seen as it didn't sell well in our timeline. Despite all the missed opportunities, the Stones were truly unbeatable up to 1973, and whichever way they chose to release their material, I'm sure we'd be satisfied.