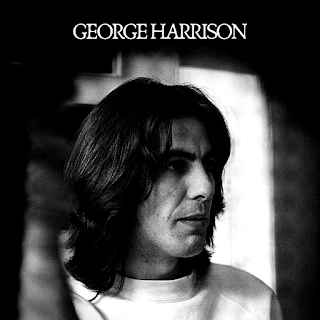 The Beatles' self-titled double album was released in November 22nd, 1968 by Apple Records. It was very important for a number of reasons: it was the group's first (and only) double LP, and began a trend that saw band members collaborating less and less while working on songs, leading to some calling the record "four solo albums at once". Most significantly, it signaled a very sharp increase in the quality of George's output, with his While My Guitar Gently Weeps rivaling most of John and Paul's tunes on the record, and even being considered the best track on it by some. The problem for Harrison, however, was that the rest of the band didn't seem to catch on to that, and he felt rather sidelined when there came the time to contribute material, only getting two or three songs out while Lennon & McCartney dominated their output. To further his discontent, after the release of the album, George visited Bob Dylan and The Band in their country home of Woodstock, NY, and became rather impressed by their communal and democratic style of writing and recording, with everyone getting an equal say. The trip also saw a great burst of creativity for him, penning a couple of songs during and shortly after it, as well as even co-writing two songs with Bob Dylan, who was seemingly pretty impressed by Hari's songwriting back then.

So it must have been quite the reality shock for the guitarist to return home and play with the Beatles again during the Get Back sessions, that January. He had stockpiled a rather large amount of tunes, between the Woodstock trip and then, but saw his songs once more being ignored in favor of subpar material, such as Maxwell's Silver Hammer and Dig a Pony. To add insult to injury, he had to suffer through thousands of takes of the duo's songs, while his were met with subpar performances and half-assed attempts at best, even when the tune in question was much better than what they had to offer. Things came to a point that after a week of sessions, he quit the band on January 10, citing the endless takes and perfectionism of Paul, their ignoring of his material, and the fact they were being filmed as the prime reasons for that. They managed to coax him back a couple of days afterward, but the seed of his detachment of the band was already there. As such, he and Lennon discussed plans of him making a solo album that year, to "let all those songs out", and not having to worry about them not being recorded by the Beatles, something which Lennon encouraged and approved of. The rest of the Get Back sessions went by without much more tensions between him and the band, as he had become quite detached and bored by then, only contributing the bare minimum.

His plans for a solo record, however, didn't seem to go much further than that brainstorming session in mid-January. By February, the Beatles had gotten back to recording together the usual way, with much less tension than before. The fact John got into a car accident sometime around then made it necessary that George and Paul collaborated a lot more than usual, and they did so in good terms. A good example of the collaboration between the two being Paul's superb bass playing in Something, which was the first A-side Beatles single written by him. It was a very popular track, and it even managed to get to the Top 5 in the American singles chart, getting almost universal acclaim alongside Here Comes the Sun, his other song on the album. If there was any doubt of George's growth and excellence as a songwriter by then, it was all but eliminated with the release of those two fantastic tracks. After the release of the album, however, Lennon privately announced he was leaving the group, and the band proceeded to splinter. George went and toured with Delaney & Bonnie and Friends, him already being a pretty big fan of the duo and their backing band, those being his first live performances since 1966, and finally decided to make his first solo album, recording and releasing the majestic All Things Must Pass album in 1970.

However, what you might have figured out I'd ask is: what if he had made a solo album in mid-1969? If he had followed suit with his plans to record a solo LP with all the songs he had stacked by then, what would that look like? Well, to figure that out, we need to set some ground rules first. The first one would be of a "deadline" to when the album's songs can be written, or at least begun. That deadline would be sometime in August 1969, which is right before the Beatles disbanded and he went on tour with Delaney and Bonnie, that signaling the end of his November 1968 begun writing streak. Also because of that, For You Blue won't be considered as a contender for the record, as it was already recorded with the Beatles for the Let it Be album by then, and we will focus on the February/August period for recording, that putting the album's release sometime in November. The album would most likely feature some 10/12 songs, considering the standard length of the albums back then and the amount/quality of songs he had. Such a record would absolutely feature his two Abbey Road tunes, as I think he'd want to give his solo career the best shot possible, and give something more subpar like Window Window to them in order to still contribute to the band. Anyway, without extending this any further than we already have, here's our tracklist:

I'd Have You Anytime (All Things Must Pass)
Window, Window (Beware of ABKCO)


Considering the amount of breathtaking classics he had available back then, it's honestly not too hard to make a great album out of this, and what I first decided on was the opening and closing tunes for each side. The obvious choices were ending the sides with "the epics", namely Isn't it a Pity and Hear Me Lord, and beginning side two with catchy upbeat Here Comes the Sun. The album opener was a more complicated choice, but What is Life with its long instrumental intro, upbeat nature and even "welcoming" feel, make it a pretty natural opener. From then on, I tried to fill out the middle with what I considered the best tracks on the record, while spacing out the Beatles tunes as much as possible. Right out of the gate, I was able to exclude both Window, Window and I Me Mine, as neither were considered by George for release back then, with IMM only being brought back to fill the Let it Be album. So we end up with nine songs to fill eight possible slots, with either Old Brown Shoe or I'd Have You Anytime getting the boot. I, unfortunately, went with the latter, as Old Brown Shoe manages to serve as a more upbeat fun track, which this album, aside from WIL, HCTS and Wah Wah, seriously lacks. However, I still see fit for it to be used as a non-album b-side, for it to not be wasted, or even a single if George is feeling audacious.

A small change that would make one hell of a difference to the ATMP tracks is the lack of Phil Spector on the producer's chair. Instead of him, it would have most certainly been produced by George himself, with orchestrations and co-production by his friend John Barham, who co-produced his Wonderwall LP as well. As a result, the album would probably have a much more stripped down and cleaner sound, more akin to the Abbey Road LP than Spector's reverb-laden Wall of Sound. The personnel would also change a bit, as he hadn't met Delaney & Bonnie and Friends by then yet, so no Jim Gordon, Carl Radle, Bobby Whitlock, and no horns. It would most likely consist of the rest of the ATMP personnel, minus Badfinger and plus some other big names at the time like Nicky Hopkins, only this time not playing all at once on the same song. Another big difference in the album's sound would be that Harrison only started developing his now trademark slide technique during the D&B tour, so it would too be absent here. Instead, the predominant guitar sound would most likely be the Leslie speaker combo he premiered on Cream's Badge and used all through 1969. Another change is that some of the songs, most notably Wah Wah, probably wouldn't be as overlong, since we're not talking about a double album anymore, and some editing would be needed to make this fit into two sides.

Regarding the arrangements, What is Life would feature more or less the same arrangement, perhaps without the horns and more prominent backing vocals. Something would hopefully keep its arrangement, and since Paul and George were in good terms back then, I can even see him guesting on bass on this track, preserving its iconic bassline in here. Next up is All Things Must Pass, which would most likely feature more prominent harmonies and none of those distracting horn parts, sounding more like the Band-inspired track that it actually is. Old Brown Shoe would sound more or less like it does now, as would the Band-soundalike Behind that Locked Door, being the last-written track on the record. Isn't it a Pity would sound pretty much like the 2nd version of it on the 1970 album, providing a great end to side one. Here Comes the Sun remains untouched, and Wah Wah would probably get its reverb washed out and get shortened by a good minute and a half. Getting rid of the horns and orchestration would be good too! Let it Down would probably keep its bombastic nature and great orchestral arrangement, while The Art of Dying would exchange its mariachi band thing for a more guitar fuzz-led arrangement. Run of the Mill stays the same, as it too already sounds like a great stripped down track, and Hear Me Lord would probably just tone down on the reverb, while keeping its epicness intact.

This album would be titled simply George Harrison, I think, and to further represent that, the cover is simply a picture of him from April 1969 with his name superimposed at the top. The album clocks in at almost 50 minutes, and would most certainly have Something as it's lead single, followed perhaps by Here Comes the Sun. Commercially, it would no doubt perform pretty darn well, as it was the first real solo album by a Beatle, and before the band even broke up per se. And as for its impact on the breakup, I don't think it would have much impact, since John would already have quit the group even before this record hit the stores. The change I can see happening is that this album, not McCartney six months later, is followed by the breakup announcement and following acrimony and sorrow. As for critical acclaim, I don't think any album with this caliber of songwriting, cast, and performance could be considered weak, and the press at the time would certainly be as surprised and overjoyed by the album as they were by All Things Must Pass. The thing this lacks, for good or bad, is the sheer scope and message that releasing the triple album we all know and love had, showing everyone just how good of an artist he was. But for all the epicness and sheer magnitude this misses, it compensates with simplicity and ease not found on the original, showing you just how much difference a year can make.