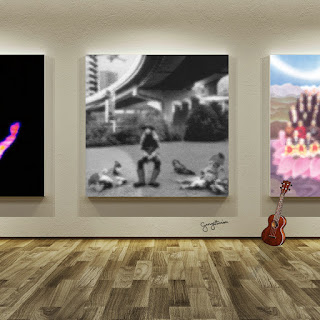 George Harrison released the album Cloud Nine in November 1987, his first release in five years. His previous outing, Gone Troppo, was an absolute failure, not managing to impress critics and failing to sell enough to make an impact on the charts. Such rejection prompted him to take a break from the music industry, focusing on his son's raising and gardening, only taking part on recording a soundtrack for one of his Handmade Films movies in the meantime. A surprise hit for him, Cloud Nine featured the hit single "Got My Mind Set On You", a cover of a Rudy Clark song from the late fifties, and the album sold remarkably well, managing to finally spark some interest on George's then overlooked solo career. One of the differentials of this album, as compared to his previous LPs, is the presence of a producer alongside him, namely Electric Light Orchestra's Jeff Lynne, his longtime admirer, and recently converted record producer. It gave C9 a sense of unity and form not seen on any of his albums in a long time. In order to cash in with the album's success and popularity, he recorded a couple of music videos for his songs (we're talking about the middle of the MTV era, mind you!) and released some singles off the LP, alogside GMMSOY.

One of those singles happened to be "This Is Love", and it needed a b-side. Having had some ideas for a track to fulfill that position, he asked Lynne to produce it over dinner with him and their friend Roy Orbison, who was asked to tag along. Soon after, they ended up in Bob Dylan's home studio with Tom Petty, and the rest is history. The finished song, "Handle With Care", was considered too good by George's label to be tossed off as a b-side, and so the five of them decided to form a group, named The Travelling Wilburys. They ended up releasing two albums, titled funnily enough Volume 1 and Volume 3 in 1988 and 1990, respectively. The second was recorded without Roy, who unfortunately had passed away in late 1988, due to a heart attack. They all took on nicknames/personas for the albums, which were warmly received and critically praised, being considered one of the most famous "supergroups" of their time. After the group entered a hiatus following the release of their 2nd album, he did a short tour of Japan with Eric Clapton in 1991, and went back to not recording much and being more of a recluse, only regaining interest in recording shortly before his death in 2001.

However, with the success of his comeback record, it was expected that he would soon record a followup to it, to try and keep his newfound popularity as high as it was back then. And so he did, with Lynne back in the producer's chair, recording sporadically throughout 1989. They managed to track three new songs: "Poor Little Girl", "Cockamamie Business" and "Cheer Down", all three meant for his next album. Despite recording some good songs, Harrison was a bit too burdened with recording and writing for the Wilburys, to manage to record an album to his liking, and he ended up scrapping his plans for a new record. The new tunes ended up finding a home in one of his Greatest Hits compilations, later in the year, with "Cheer Down" also being released on the soundtrack to the movie Lethal Weapon 2, which made it a quite successful single. That left some top notch already written tunes in his pocket for either a future release, or to be used by one of his many musician friends on their albums. The ex-Beatle's long-awaited followup wouldn't happen until almost 15 years after this first attempt, when he released his posthumous Brainwashed album in 2002.

However, what that might have left you wondering was: what if he hadn't given up on recording the album? To answer that question, we have to look at the songs George had available by then, as he had kept on writing after C9 was released, and would continue to do so on and off for the next couple of years. As the writing dates for most of his output is known, we will limit the songs to 1991, which is a likely date for its release, for him to be able to record sporadically between his commitments with TW. Speaking of them, no songs featured on their two albums will be a part of this, as that would end up screwing the timeline, and they really don't mix in well with the rest of the material, due to the great deal of collaboration on them. And it's not as if we need it, as we are supplied with enough material for a really top-notch album. One outtake from Vol. 1, however, will be included: "Maxine", which was mostly written and sung by him, making it fair game for this reconstruction. As well as that, one of the songs only features George on slide and backing vocals, despite having written it, something that will be addressed later. Without making you wait even longer, here is our LP:

George's self-portrait begins with "Any Road", from Brainwashed. It was written during a break on recording the "This Is Love" music video, in early 1988. It predates the whole Wilbury thing by a couple of months and is one of the highlights off the album, being rightfully brought back in the late nineties to be the opener in his posthumous record. "Last Saturday Night" began life as a Cloud 9 outtake, being recorded during the original album's sessions in '87. However, he and Lynne deemed this satirical, Christianity bashing song too good to sit in the vaults forever, and brought it back with some minimal overdubs for his next album, something we guess they would still do in this timeline. Serving as track no.3, we have the first of the 1989 session songs, "Poor Little Girl". One of the most underrated songs in his back catalog, it suffered a lot from being put in a forgotten compilation, something we hope to manage to avoid here. Up next is "Cheer Down", co-written with Wilbury Tom Petty. The most probable lead single from Portrait of a Leg End, due to its popularity and inclusion on the Lethal Weapon movie, it's also a great tune, something this album has its fill of.

Following the lead single is the quirky "Cockamamie Business", the third from the '89 sessions. They are put together because they sound good segueing from each other, especially in the order I put them. Next is one of the trickier songs from the album, "That Kind of Woman". Written by Harrison, and featuring his trademark slide guitar playing and backing vocals, no version with him on lead vocals has surfaced yet. That being said, Gary Moore's original 1990 version with him really comes close to being a GH recording. If you close your eyes and squint your ears a bit, it almost sounds like him. Opening up side two is "Stuck Inside a Cloud", the most probable 2nd single from the record. According to drummer Jim Keltner, it was a pretty old song, from the mid-eighties, with it being brought back, later on, to be included on Brainwashed. We will do the same here, as it is a great tune, and was already in the can for him to use. Following it up, "Run So Far" was given to his buddy Eric Clapton to be used on his Journeyman album, in 1989. The second of his "giveaway" tunes, he would later record it, showing he saw potential on the song, and that's a decision we will respect.

Up next is "Never Get Over You", written more or less in the same era as "Stuck Inside a Cloud", during the mid-eighties, and brought back later when there came the time for Harrison to compile BW. The second anomaly on the record, the nice "Maxine" comes next. An outtake from the Volume One sessions, it's basically a solo George song, with him handling most writing and singing. And as the Travelling Wilburys and him shared the same producer and backing band, it's only fair enough that we put it in here. The oldest song of the bunch, "Rocking Chair in Hawaii" had its origins during the All Things Must Pass sessions in 1970. Sometime later, it was re-written and re-recorded by him for his new album, with the arrangement being considerably similar to the original one from ATMP. What else could follow the oldest tune on the LP, and also end the record? The newest of the bunch, and one of his best, of course! "Rising Sun" was mostly written during the 1991 Japan Tour, according to his son Dhani. The track would be a pretty strong contender for this record, once he returned, and ends the album in a great majestic fashion, as it should be.

As an album, "Portrait of a Leg End" is a pretty good record, managing to pick up where its predecessor left out and even evolve on its ideas. It manages to have a consistent quality and sound throughout, and functions as sort of a "missing link" between Cloud Nine and Brainwashed, something that is pretty interesting to hear. Although some inevitable and constant overlap with the latter, it doesn't detract from the album at all, to my ears, and both can co-exist peacefully in my iTunes library. It is a respectable record by an already aging rock star, with much more high points than lows. Clocking in at about 47 minutes, with sides of similar lengths, the album would most probably be released in mid-1992, to both give him time to finish it, and to coincide with his last concert appearance in April. As for the album's name, it is based on an early working title for his final album, being both a pun on bootlegs, and a piss-take on his legendary status as an ex-Beatle. Despite the name being a bit exaggerated, this record paints a really nice picture of where he stood in this point of his life, with his not considering himself a legend not mattering much.
Sources:
- George Harrison - Brainwashed
- George Harrison - Best of Dark Horse '76-'89
- Travelling Wilburys - Travelling Wilburys Vol. 1
- Gary Moore - Still Got the Blues
Posted by The Reconstructor at 01:22