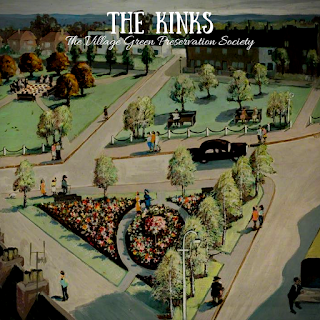 The Kinks first recorded the song "Village Green" during the sessions for their Something Else LP, in late November 1966. However, instead of including the song in the album it was originally meant for, leader and main songwriter Ray Davies decided to store the song for a future project he had envisioned, where it would be its' centerpiece. At first, it would be a solo project by Davies, centered around the "village green" and nostalgia concepts, based on his childhood memories and experiences in England, scheduled for release sometime in late '67. However, with the others becoming interested in the concept, he decided to scrap such plans and turn the then-titled "Village Green" album into a band effort. So, recording for this new project started soon after they released the Something Else album, in September of 1967. They tracked three new songs, one of them being released as a non-album single ("Autumn Almanac", which managed to hit #3 in the UK charts), and the other two being reserved for the new record, alongside VG. Recording followed, with sessions happening throughout 1968, until August, when they finished a 12-track master.

Scheduled for release on September 27th, this 12 song "Village Green" album was soon canceled under Ray's wishes. He had asked Pye, their label, to have some additional time to track new songs, and perhaps even expand it into a 20-track double LP. The label reluctantly agreed, and so in September, they recorded an additional two songs for the record, them being "Big Sky" and "Last of the Steam Powered Trains", and started to mix the new double LP. However, Pye weren't that confident in the band back then. The failure of their latest single, "Wonderboy", which barely made the top 30 in England, had left a bad taste in their mouths, and a double LP by them would be a big bet. They decided to nix the idea, much to Davies' anger and insisted on it being a single album. As a compromise, however, they decided to allow the album to feature fifteen tracks, instead of the original twelve. That meant two tracks would be removed, them being "Days" and "Mr. Songbird", and the two newly recorded songs and three outtakes would be added. That gave "Sitting By the Riverside", "Animal Farm", and "All My Friends Were There" the spots they now have in the LP.

So, what did they do with the rest of the material? The band ended up releasing the fantastic "Days" as a non-album single, ending up with a big hit (#12 in the singles charts) and one of their best-remembered tracks. And the band's American label, Reprise, alongside Ray, had scheduled to release an 11-song album titled Four More Respected Gentlemen compromising of some of the outtakes and some album songs. Titles like "Misty Water", "Polly" and "Berkeley Mews" were featured, and the compilation was even given a serial number, and release was imminent. However, once more it seems luck wasn't on their side, and the label ended up scrapping it and releasing only the regular 15-track album instead, based on its strength. That way, the songs ended up released on a mess of rarities comps, greatest hits records, and some other very peculiar releases, instead of in their home, Ray's concept of the Village Green. Despite having that many difficulties in the making, the released album was almost unanimously acclaimed, and although selling poorly, managed to become a classic of the 1960's British music scene, and to some their greatest record.

So you might be wondering, by now: what if their wishes of releasing a 20-track double album had come to fruition? First of all, we would have to address one of the main problems of that idea: the album's length. If one were to follow that song limit, he'd end up with a terribly short and brief record. My many attempts at that ended up clocking in at a paltry 54 minutes, and left out quite a lot of fantastic tracks, which would certainly have impacted the commercial potential of the album. Donovan's "A Gift from a Flower to a Garden", also released on Pye, was criticised for just that, only featuring 22 songs in 60 minutes, selling considerably less than his two previous outings. So I think that had Pye Records greenlit the project, they'd ask Davies and the band to try to expand the record into more ideal 25-ish tracks, as a bare minimum. They certainly had enough quality tunes to turn that into a reality, and a minimal amount of work would be needed for such a thing to happen. Hence, that's the format we are going to tackle on this reconstruction, with the best 1968 songs that fit the album's theme. So, not to stretch this out any more than I already have, here is the tracklist:

As the Kinks recorded a great number of songs on those year-long sessions, we first need to decide what songs were meant for the album, in the first place, and what weren't. First of all, we know that any songs penned by fellow Kink Dave Davies weren't meant for the concept, and yes for his solo album, "Lincoln County". They also don't really fit into the album's concept, which makes sense considering that. Secondly, I tried to include all songs meant for the album that were in either version of the album, as well as on Four More Respected Gentlemen. The only songs cut were "She's Got Everything", the b-side for "Days", which was only intended for that and recorded two years earlier, and "Autumn Almanac", which was released a whole year earlier than the VGPS album. I did include "Wonderboy", as it was released close enough to the record, and fits in really well into the concept. Four songs from the sessions were also scrapped: three sub-par instrumentals that sort of went nowhere, as well as "Till Death Do Us Part", that, although fantastic, was neither part of the concept or meant for the album, being featured in a movie later in the year.

In sequencing the album, I tried my best to preserve the 15-track album's sequence, as it's nearly perfect, and sort of "sandwich" the outtakes in between album songs, to maintain sonic unity. The whole album is in mono, as two of the songs ("Pictures in the Sand" and "Did You See His Name?") weren't given dedicated stereo mixes back in the day. I believe that, had they carried on with the double album project, those songs would be mixed to stereo, most likely on those final September '68 sessions. And all the mono mixes are the original 1968 ones, with only two exceptions. The first being "Village Green", featured in a version with no orchestra. As it was the only song in the album to feature orchestration, it sort of stuck out alongside the rest of the material, which features the mellotron playing of session man Nicky Hopkins instead. The second is the closing track, "People Take Pictures of Each Other". Featured in its regular mono mix, but with the addition of 30 seconds of Big Band music, as an outro to the album. Ray Davies said in an interview that he had intended to do such a thing, but ended up not doing so due to copyright issues. Go figure.

Side one keeps the first five tracks intact, but adds 12-track reject "Mr. Songbird" to the mix. It's a pretty good song, with a very different arrangement compared to the others, which helps add some variety to it. As for side two, we can keep "Animal Farm" as a side opener, and add "Big Sky" and "Sitting by the Riverside" from the original side one, with the latter as the closer. Added are "Did You See His Name?" (not featured in any of the albums, but a great song that fits within the theme), "Polly" and "Misty Water", both from FMRG. Side three turns "Starstruck" into a side opener, alongside three other album tracks. Added are "Rosemary Rose", from the original 1967 session, "Berkeley Mews", from the Gentlemen album, and the "Days" single as the side closer, as I don't believe a song like that can be followed. For the last side, "Village Green" becomes an opener, and the final two tracks from the original, "Monica" and "People Take Pictures of Each Other" remain in that function. Added are "Pictures in the Sand", shortlisted for the album but later scrapped, the "Wonderboy" single, as well as "Lavander Hill", from the first late '67 sessions.

All in all, as an album, The Village Green Preservation Society doesn't suffer from being a double LP. Ray Davies was in his songwriting peak, back in the day, and had written more than enough quality songs for a double, thematic album. The longer running time also allows us to add more depth to the concept, with different songs and points of view, which is beneficial for it. Clocking in at 65 minutes, with all sides ranging in between 16-17 minutes, the album would no doubt have sold poorly, confirming Pye's fears, but I do think the inclusion of "Days" would have helped the sales at least slightly. The cover, created by me, replaces the rather bland and uninteresting original, using a painting of an actual village green instead. It's really a shame that their inconsistent chart success ended up compromising Ray's artistic vision, despite the end result still being fantastic. Now with the 50th anniversary of the album nearing, it is a possibility that they compile a two-LP version of it in the upcoming deluxe edition, although unlikely. Hopefully, Davies' remembering of the village greens, childhood friends and happiness can be released in full soon.
Sources:
- The Kinks - Village Green Preservation Society (Deluxe Edition, 2004)
- The Kinks - The Anthology 1964 - 1971 (Box Set, 2014)
Posted by The Reconstructor at 18:21