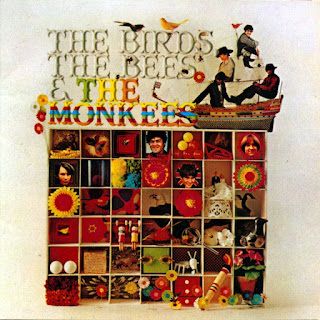 The Monkees released their third album, "Headquarters", in May 1967, on Colgems Records. What some regard as their first "real" record, it saw them play and sing on all songs, and having a say on what the finished product would sound like. They had ex-Turtles bass player Chip Douglas on the producer's chair, who was invited by Mike Nesmith, even without any considerable producing experience for himself. They managed to record a hit record, which was only behind "Sgt. Pepper's Lonely Hearts Club Band" in sales during that summer, and that way proved themselves out of their "fabricated" image. Talk about an achievement! Chip also played bass on most songs, freeing up de-facto bassist Peter Tork to play keyboards or banjo on them and spice up the arrangements. The only considerable weak link was Micky Dolenz's drumming. He had few, if any, experience behind the kit until then, and it really shows. However, he was solid enough to not harm the record, and despite having to record a lot of takes for some of the songs, it all turned out ok. Reviews back then were positive, and gave new confidence to the four of them, after fighting to be able to record their own LPs. The group even managed to act on their very successful TV show and tour the US and Europe after the album's release, somehow managing all that at the same time.

During the breaks in touring, they regrouped with Chip and recorded a follow-up record, "Pisces, Aquarius, Capricorn & Jones Ltd.". Due to the deadlines involved with providing music for the TV show, they had a lot less time to prepare themselves for such a thing. That led to them using a session drummer, Eddie Hoh, and Douglas to a greater degree than they had before, as sort of a "mixed approach" to the band. It worked, as the album was a huge hit, propelled by the non-album single "Daydream Believer", hitting #1 in the Billboard album charts. Believer was discovered by Chip, and its demo had been passed around quite a while, without anyone taking on it before he did. With him arranging it, it became a surefire hit, as he had done with the Turtles' "Happy Together". As a result, the band had much more confidence and knowledge of the studio, and that resulted in a much more polished record, with psychedelic undertones and even a fair bit of experimentation. All that while still keeping up with a hectic schedule and having great input from the band members. Impressive, to say the least. However, one member, in particular, Tork, wasn't as happy with the end result. Both the fact that CD did most of the keyboard arrangements for him, and that he failed to contribute an original to the record left him a bit hurt.

However, after the end of the TV show, the band members ended up drifting apart considerably. As a consequence, they became much more interested in recording by themselves, with session musicians filling in for the other Monkees and much less focus on original material. Peter, especially, being the one most dissatisfied by Chip's approach, ended up recording most of his material this way. That meant that, despite them doing some initial work on the follow up to Pisces, Aquarius, Capricorn and Jones with him, they ended up sidelining Douglas and doing each their own thing. He tried to still keep himself involved, by producing some sessions with session musicians, recording a backing track for "We Were Made for Each Other", which went unused. So from December 1967 to March 1968, they recorded their own material, with a couple of songs by each being compiled into a Monkees album, The end results of said sessions was 1968's "The Birds, the Bees, and the Monkees". The beginning of their commercial decline, it was the first of their albums not to feature a #1 single, with "Valleri" going to #3 on the charts. A solid album, but mostly inessential, it went to show how much he was their "hidden weapon", and that his absence created a drop of quality, as well as of commercial success, alongside the end of the show.

But what if they had kept Douglas, and therefore their collaborative system? To answer that question, we must first take a look at the "tropes" from that era of the band. The two albums of the Douglas era of the band formed a clear pattern of how they chose and sequenced material. We will discuss that further later on, but let's start with the basics: 12-ish song albums, alongside a non-album single and b-side, to be released more or less at the same time as the album, if not slightly earlier, with a majority of outside-written tunes, but also giving space for a couple of band originals. I'll use those as sort of a blueprint of what they would most likely have done with the next album. I'll obviously use the session musician versions of the songs, but explain how the group would interfere in the song's arrangement and so forth. All tunes will also be from the November '67/March '68 timeline, as to keep us limited to what they actually were working on back then. We will also follow the assumption that the same hybrid-band system of PAC&J will be kept, if not expanded on, on certain occasions. We will keep the same album title and cover, as I was always a fan of the artwork, and it fits in rather well with its predecessor, as opposed to Headquarters' rather dull cover art. Anyway, to not extend this any further than I already have, here's our tracklist:


The Chip-era Monkees albums had a couple of basic tropes and characteristics, which we will explore here to create the most likely followup to Pisces. The first of those was the recycling of Boyce/Hart and Brill Building material from the More of the Monkees era, redone in psychedelic arrangements. As had been done before with songs such as She Hangs Out, Words, and Mr. Webster, they would probably have at least a couple of songs in that fashion. Considering that, we can pick out five tunes to fit this bill: Through the Looking Glass, Valleri, and P.O. Box 9847, from Boyce and Hart, and We Were Made for Each Other and I'll Be Back Upon My Feet by the Brill Building writers. All of those songs would most likely feature pretty similar arrangements to the ones we actually got, with the exception of We Were Made for Each Other, featuring Chip's fantastic unused backing track. It sounds almost like a completely different song! Other songs by outside writers would also probably be used, as was the case of Cuddly Toy, written by Harry Nilsson, and many others. Therefore, it's safe to assume the same would happen, and include Nilsson-penned Daddy's Song and Bill Chadwick's "Zor and Zam". Both would keep more or less the same arrangements, too, and in Daddy's Song's case, give the album a good "controversial" track!

Another trope from the era was the albums being heavy on Mike Nesmith originals to serve as deep cuts, such as Don't Call on Me, Sunny Girlfriend and many more. They generally were the weirder, more experimental tracks, featuring a mix of country and psychedelia. So we follow suit adding what I consider the best Nesmith originals of the era, touching on psychedelic rock with Tapioca Tundra and Circle Sky, and country with Carlisle Wheeling, giving us some fantastic digressions of their more pop leanings. They would all feature nearly identical arrangements, as the Monkees did perform Circle Sky as a four-piece, and as for the others, Mike was pretty sure what to do with his tunes back then, Chip notwithstanding. Speaking of originals, it was also standard, as seen in songs such as For Pete's Sake, Daily Nightly and The Girl I Knew Somewhere, to see Mike and Peter giving a couple of their songs for Micky to sing. And following that, we have Tork's Can You Dig It?, first demoed during the PAC&J sessions, and Mike's Auntie's Municipal Court. Both were given to Dolenz and recorded with their writers as producers, so I don't see why the arrangements would be any different. With six self-penned songs, it's in second place after Headquarters as the album with the most band originals, and has a couple more than its predecessor, which shows their growth quite well.

We would also have, unfortunately, some sub-par material added. As with Hard to Believe in Pisces, there would probably be one self-produced Davy Jones song, with no involvement from the others. For that role, we go with the song co-written by Steve Pitts and Davy, Dream World, as it fits in rather well with the rest of the material. This is the one song which would be the exact same recording as on the album, so no changes needed. Finally, we have what The Monkees missed the most from Chip: his ability to find a #1 single like no one. He took and arranged obscure and rejected songs such as Happy Together and Daydream Believer, turning them into hits. So we ask, what song can fill that role? Well, after he was fired from the band, he went back to his old job with The Turtles, and produced their Battle of the Bands album, which featured You Showed Me. This was an old Byrds song written by Gene Clark and Jim McGuinn, redone in a slow arrangement, complete with organ and fantastic harmonies. I do believe he would have given this song to them, had he stayed, and recorded it with them, maybe with Davy on lead. As it wasn't recorded by the band, I relegated it to a bonus track, but I could easily see it being a non-album single, like Daydream Believer, with P.O. Box 9847 as its b-side. Oh well, we can dream, can't we?

As an album, this would be as much of an evolution as its predecessor was from Headquarters, and hopefully would establish them as a great psychedelic pop act. When compared to the two albums that come before it, it fits in really well, featuring songs and performances of the same caliber, if not sometimes better. With Valleri and You Showed Me as lead singles, it would be sure to perform well, and hopefully, sell as much as the albums before it. It was sequenced to alternate between lead singers and styles as much as possible, taking cues from how they were sequenced in other albums. Despite that, the LP doesn't sound too jarring, and would sound even less had it been recorded as a real group effort, as advocated here. Clocking in at some 34 minutes, with even length sides, it and its lead single aren't that off the norm for albums back in 1968. It would be released sometime in early May of the same year, with the You Showed Me single being released a couple of weeks before. With such great material and talent available, it's a shame that the band couldn't make take advantage of that and release many more great albums together, and suffered from poor sales and a lack of deserved critical acclaim. Now more than ever, it's a shame they couldn't turn their time with Douglas into a trilogy.

Sources:
- The Monkees - The Birds, The Bees, and The Monkees
- The Monkees - Head (Original Soundtrack)
- The Turtles - Present the Battle of the Bands
Posted by The Reconstructor at 16:15 2 comments: