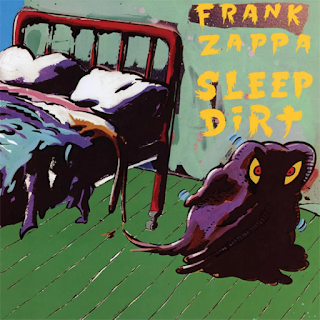 Frank Zappa and The Mothers of Invention released their tenth studio album, "One Size Fits All", in June 1975. Featuring the Fall 1974 lineup of the Mothers, it was the last studio album Zappa released under the MOI moniker, as he disbanded the group in mid-1975. The album was recorded mostly in two separate sessions: one, which took part from early to late December 1974 at James Guercio's Caribou Ranch in Colorado, and sessions in mid-January 1975 at LA's Record Plant. With both of the sessions combined, Zappa and the Mothers recorded enough for a double record, with half of the material being more rock-oriented material with vocals, and the jazz-fusion inspired instrumentals making up the other half. Interestingly enough, Frank released the rock-oriented songs as the OSFA record, leaving the jazzier, more experimental songs in the vault, from which they'd only come out in 1978 in the earliest. Afterward, the guitarist changed his focus to a Beefheart collaboration album, recorded both live in the studio, called Bongo Fury, released in October, and to using a full-scale orchestra in concert, in September of the same year.

The songs from those sessions would still figure as part of Läther, a four-LP box set which was supposed to be released in late-1977, alongside material recorded both live and in the studio, from 1969 to 1977. His record label, Warner Bros, didn't quite like that idea (I wonder why), and seen as FZ was in the middle of litigation with both his former manager and his label, Zappa split the tunes into four different albums, with most of the songs from the sessions coming out in Studio Tan, from 1978, and Sleep Dirt, in 1979. However, according to Zappa himself, a long time before both Läther and the four record split, this material was supposed to make an album of its own. Frank says in the liner notes of One Size Fits All that it was recorded simultaneously with its followup, and stated in an interview in April 1975 that "Greggery Peccary", started in the December 1974 sessions and finished in LA in January, would be a part of the record. So it seems that Zappa had intended to release these songs in 1975 after all, only to wind up getting distracted by Bongo Fury and his Orchestra project and shelving the songs, leaving them in the vault.


That leads us to this reconstruction's primary question: what if Frank Zappa had released his second installment of the December/January sessions? And to answer that question, we'll have to set up some basic rules first. We can't take tracks from either One Size Fits All or Bongo Fury, in order to keep his already confusing and messy discography as cohesive as possible, and to let it coexist with the two LPs it would be released in between of. In addition to "Greggery Peccary", we'll include only songs he deemed worthy of inclusion in either Läther or the four albums, in order to keep some kind of quality control over the material. Whether it would be released as a Mothers or a Frank Zappa solo record, it's pretty debatable. On the one side, it was recorded with the same band as the Fall 1974 incarnation of the MOI, but on the other, Zappa normally released his fusion projects, such as Waka Jawaka and Hot Rats, as solo albums. And considering the 1979 Sleep Dirt was almost subtitled "Hot Rats III", and it features almost all of the songs on our reconstruction, I feel like it's safe to assume this would be a solo album. Anyway, here's our tracklist:

Bonus tracks:
A Little Green Rosetta (Läther)
Planet of My Dreams (Them or Us)

In December 1974, he and his band recorded "Sleep Dirt", "Regyptian Strut", "Flambé", "Spider of Destiny" and "Time is Money", from the album Sleep Dirt, and "RDNZL" and parts of the 20-minute "Greggery Peccary", from Studio Tan. They also recorded the basic tracks for "Planet of My Dreams", which would only see release in 1984's Them or Us. In January, they also tracked "Revised Music for Guitar and Low Budget Orchestra" and the rest of "Greggery Peccary", from Studio Tan, and recorded the first part of "A Little Green Rosetta", from Läther. From those, we can exclude both the then-unfinished "Little Green Rosetta" and "Planet of My Dreams", seen as neither of them were up to Frank's quality control back then. One more exclusion we'll need to make is "Revised Music for Guitar and Low Budget Orchestra", seen as it doesn't fit in as well with the rest of the material, and has much more in common with the September 1975 Orchestral Shows (of which it was part of), than this more fusion-like record. We can include it and "Rollo" on an expanded version of Orchestral Favorites, bringing its length up from a mere 34 minutes.


Now that we've narrowed the song list to album length, all we need to do is sequence the songs in a proper and interesting way. We start side one off with "Regyptian Strut", and end it with "RDNZL", taking our cues from the Läther album's original sequence, which had the former as album opener and the latter as last song on side three. We also reserve most of side two to "Greggery Peccary", as it was the final track on the final side of Läther, only adding the short "Time is Money" as side opener, making side two a healthy 23 minutes. And as for the rest of side one, I sequenced "Sleep Dirt", which would probably still be our title track, as track two, and put the combination of "Flambé" and "Spider of Destiny", which worked pretty well together on the Sleep Dirt album, as tracks three and four. I'd also note that none of the songs are included in their Läther mixes, due to some anachronistic vignettes being included in the start and end of tracks, which Zappa employed as a thematic link, and due to the fact that the Sleep Dirt mixes are considerably longer than their unreleased counterparts at times, which is beneficial when it comes to this.

Had FZ taken this project further, it would probably have been released sometime in September 1975,  through his own DiscReet records, with the release of Bongo Fury postponed to December or even January of 1976. I do believe that he would have still used the Sleep Dirt name, with the Hot Rats III subtitle as per his wishes. The cover would obviously be replaced by a Cal Schenkel work, seen as he was Zappa's artist of choice, and the released cover by Gary Panter isn't particularly great. No singles would be released off this album, seen as none of them have much commercial potential, and it's not as if he expected any hit singles to come out of an album like this. When compared to the two other installments of the Hot Rats Trilogy, it certainly is no slouch, and can stand as an equal to both Hot Rats and Waka Jawaka, maintaining his experimentation with jazz and experimental music, and it's probably no coincidence that they were to be released in three-year gaps (1969, 1972, 1975) either. It really is a shame that we never quite got to enjoy these fantastic tracks the way they were originally meant, as a lost brother to his most celebrated album.