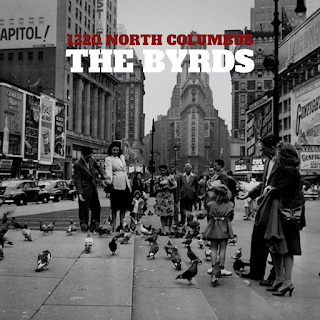 The Byrds released their fifth album, The Notorious Byrd Brothers, in January 1968, through Columbia Records. It featured rhythm guitarist and vocalist David Crosby's final recordings with the band, after he was fired in late 1967, due to his often unbearable behavior (a pretty nice, formal way of saying he was a dick!), which culminated in him promoting conspiracy theories about JFK onstage during their appearance on the Monterey Pop Festival that same year. Curiously, it also features ex-member Gene Clark, who had left the band in mid-1966 and was in the midst of a failed solo career, singing backing vocals on a couple of the album's tracks, which makes it their first LP since Fifth Dimension to feature all five of the original Byrds. He even co-wrote one of the album's tunes, "Get to You", and all that tension and stive made for a sometimes brilliant, but rather unfocused album, that also didn't sell as well as the ones that came before it. More than ever, it was obvious they needed a strong songwriter and a new sense of direction.


So it should come as no surprise that Clark was supposed to come back to the band once his ex-bandmate Crosby had flown away to form CSN. He and the other three Byrds even played a couple of gigs together in late 1967, before the same old problems that had plagued him in his first tenure with the band (which included a fear of flying and anxiety attacks) came back and he was once again booted, and the band soldiered on as a trio. After yet another band member leaving, this time ever-problematic drummer Michael Clarke, the group started rebuilding themselves after bassist Chris Hillman encountered singer and pianist Gram Parsons at random in a bank, and the two stuck up a friendship. Parsons, alongside Hillman's cousin, drummer Kelvin Kelley, would form a brand new Byrds lineup alongside the two remaining Byrds in 1968, and they would quickly record an album of their own. The result, Sweetheart of the Rodeo, is a landmark in the foundation of Country Rock as a genre, and an overall fantastic album, despite only featuring two originals.


Meanwhile, Clark was also pretty busy doing his own things back then, joining forces with banjo great Doug Dillard and guitarist Bernie Leadon to form Dillard & Clark. Despite not touring, due to Gene's many issues, they recorded a fantastic, bluegrass-tinged album in late 1968, with some fantastic songwriting by the ex-Byrd throughout its nine cuts, as well as some inspired playing by the other two. At the same time, the latest Byrds lineup splintered, as Parsons and Roger McGuinn battled for control of the group. As McGuinn obviously won that battle with ease, Parsons and Hillman deserted to go form the Flying Burrito Brothers, and the former once again soldiered on with yet another Byrds lineup. The Burritos went on to write and record their debut album still in late 1968 (that's one busy year for this band!), this time much more focused on Parsons/Hillman penned material than covers. The Mk. III lineup of the Byrds also did the same, with the messy, but sometimes great, Dr. Byrds & Mr. Hyde, which also featured some McGuinn-written gems.

So, what that all has been leading up to is: what if Gene Clark had stayed with the Byrds for a second term as a chief songwriter? To make that possible, we'll need to take a look at how such a thing would be feasible. For starters, a sort of Brian Wilson arrangement would have to take place, as in Gene would write and record with the band, but not tour, with someone else taking his place on the road. And our pick for that person could very well be Dillard & Clark bandmate and future Burrito, Bernie Leadon, who is one hell of a guitar player, a great singer (who can interpret Gene well, as proved by his version of Train Leaves Here This Morning) and all-around easy to deal with guy, as well as being an old friend of Chis Hillman's. And our task is finding and arranging all the material this five-man lineup would have brought to the table for an album, to be released sometime in November or December of 1968, as they had already released an album that year and weren't that much in a hurry. So here's what we've got going for this alternate Byrds lineup:

Bonus track:
High Fashion Queen (Burrito Deluxe)
All I Have Are Memories (Sweetheart of the Rodeo)

One of the first questions we have to ask is: which songs are included, and why? And to answer that, eight of the songs here are primarily written by Clark, who was by far the most successful songwriter out of the five, who is occasionally helped by Leadon in that department. Doug Dillard's role in those eight was mostly as an arranger, which warranted him credit on a couple of them. Effectively, he would be replaced by McGuinn in that task, who would then take those co-writing credits for himself. Other than that, we have available the two Burritos songs that are known to be mostly written by Hillman, which are "Juanita" and "Sin City", as well as Roger's two best songs from Dr. Byrds and Mr. Hyde. As you may have noticed, no cover songs are included, as the band now had four great composers and it would be pointless to add outside material, given the strength of the tunes they were writing. As is the norm, we are talking about a twelve-track, forty-minute album, with mostly evenly divided lead vocals between the three main members, which will be explained shortly.


As for the arrangements, I don't see either the Burrito or Byrds songs changing all that much, given that the former was already in a style the band showed they could cover before, and the latter could have their guitar parts easily covered by Leadon. However, when it comes to the D&C songs, things would change considerably, as those songs would most certainly be "electrified" and brought back to a rock (or at least country rock) style. Another change is that the vast array of session musicians employed for Notorious would be gone, them using just their core band members and a session keyboardist on the LP. Bernie would handle all pedal steel/lead duties, and mostly only sing live, leaving harmonies to the other three. Speaking of vocals, Clark would obviously not sing lead on eight of the album's 12 tracks, and so a bit of shuffling is needed. Two of them, "Don't Come Rollin'" and "In the Plan", are given to McGuinn, being well suited to his voice and featuring a co-writing credit by him, while "The Radio Song" is given to co-author Bernie Leadon, as his sole vocal spot.

On a more song to song basis, songs like "She Darkened the Sun", "With Care from Someone" and "In the Plan" would definitely sound a hell of a lot more like their Gilded Palace of Sin counterparts, while a song like "Don't Come Rollin'" has great potential to be a rocker, McGuinn's 12-string replacing the banjo. As for "Train Leaves Here This Morning" and "Something's Wrong", the arrangements would obviously stay acoustic, and considering Chris played the mandolin on the latter, we've almost halfway there already! The one full-band Clark song, the fantastic "Out on the Side" stays largely the same as well, giving the album a great, slow start ala "Tears of Rage". For b-sides and outtakes, we have one mostly-Hillman song from the same first batch as the FBB's first album, "High Fashion Queen", which was recorded on their followup and features Michael Clarke on drums. A nice, pedestrian song, and given that Parsons and Hillman didn't include it on their album at first, I feel like we shouldn't either. We also have drummer Kevin Kelley's Ringo moment, "All I Have Are Memories", which is pretty much ok, and comes from the Sweetheart sessions.

1320 North Columbus, named as such due to the lyric from "Train Leaves Here This Morning", makes for a great Byrds record, featuring stellar songwriting and a more focused feel than others that came before it, although it misses the variety and scope of previous Byrd records. It features great acoustic pieces, some heavy rockers, and everything in between, managing to unite the musicianship of the later Byrds with the great songwriting of the early Byrds. It clocks in at about nineteen minutes per side, which is pretty much the norm by the standards of the day, and the obvious lead single would be "Train", with either of the bonus tracks as its b-side. The cover is my attempt at emulating the style of most of Columbia's mid-60's artwork, and I'm pretty happy with the results. Given the amount of talent involved, the Byrds' future could have been very different than it ended up being, and with the right choices, instead of slowly fading away from the public consciousness, they could have taken the place of another bird-related band as one of the great bands of the seventies.