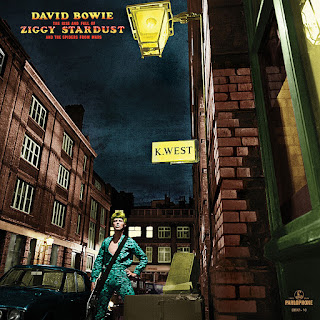 David Bowie's breakthrough album, 1972's Ziggy Stardust, is a loose and non-linear concept album about an androgynous alien rock star, who lands on earth five years away from the end of the world, here forming a rock and roll band. It tells of his attempt to give humanity hope in that dystopic future, through music, sex, and drugs, with Ziggy being the main character behind promoting that ideology. What he sees there is a world in complete disarray (caused by a lack of natural resources after years of carelessly using it all up in industry), as well as a youth completely disillusioned and distant from the generations that came before them, who they consider out of touch with reality, with them being left "on their own" to deal with the consequences. Without any electricity or desire for rock music, he and his band are seen forced to sing about the news of the period, all of them about, of course, the imminent end of mankind and its consequences to us all. He's a representation of the ultimate cliche rock n' roll superstar, being destroyed by both his drug intake and his own fans' glorification of him at the end of the album, them disappointed his calls for hope and love didn't result in anything that could save them, and the fact that the end was indeed coming soon.

The released album was both a gigantic critical and commercial success and was his first mainstream successful album, and also one of the firsts in a string of many great LPs to come from him during the seventies. Its follow-up, 1973's "Aladdin Sane", is a fantastic glam rock record that's almost as good as what came before it, sharing many of its predecessor's themes of stardom and heavy sound, its name being a pun on A Lad Insane. Bowie even nicknamed the album "Ziggy goes to America", due to it being written while on tour in the US, with its sleeve containing the name of the city each song was written in. He maintained the Stardust persona even after AS's release, adding the album's tunes to the tour setlist and simply keeping on going, giving us all the feeling that Alladin Sane was nothing more than a sequel to the concept album. And at least half of the later record fits in perfectly with the whole concept, adding depth to its characters and universe, which Bowie certainly took note of and used to his advantage during the 1972/73 tour. As well as the songs released on the album, "All the Young Dudes", an actual piece of the Ziggy narrative about the same news he transformed into songs, was also recorded, but given to Mott the Hoople instead, who had a hit single with it.

But by July of '73, it seems, he was already tired of the whole thing, and during the final show of the tour, in the Hammersmith Odeon, took all the audience by surprise by announcing his retirement from live performances from the stage, shortly before the last song of the concert. What they all didn't notice, however, was that Bowie was only doing so "in character", and was effectively putting Ziggy Stardust to rest, and moving on with his career. After that show (immortalized in D.A. Pennebaker's concert film of the Odeon show), he disbanded his Spiders from Mars backing band, and started to conceptualize two new projects: an album adaptation of George Orwell's "1984", and a musical based on Ziggy Stardust, managing to write some six songs for the former and two for the latter. However, soon afterward his interest in the musical waned, most likely due to the fact that it had only been one year since he was performing as the character and it was too soon for him to tackle such a thing. And to put insult to injury, he was denied the rights to Orwell's work, and so David combined both projects into one, transforming them into the fantastic "Diamond Dogs" album, released in mid-1974, going on tour and even becoming a blue-eyed soul artist for a while after that.

But after the release of the deluxe edition of Ziggy Stardust, in the nineties, many fans noticed its vast array of outtakes, which even included some tunes of the same caliber as the ones on the album itself. Some, such as the great "Velvet Goldmine" and the Chuck Berry cover "Round and Round", were only cut from the album in the eleventh hour, to make space for other songs he had just recorded recently. All in all, a little bit less than 20 songs were written or recorded for the album from its conception until its release. By adding the failed musical songs, and the Alladin Sane songs he performed live under the Ziggy persona, we can make up a solid double LP, without wasting a single song from his inspired late-1971 sessions. To do so, we have to have some ground rules, which are no live recordings allowed (excluding then his fantastic take on "My Death", which never had a studio recording), and no pre-Ziggy songs either, to not mess with his discography any more than we already did. His BBC recordings aren't allowed either, as to me they fit as live recordings, which ends up excluding his cover of The Velvet Underground's "White Light/White Heat", as much as I love it. Anyways, not to stretch this out any further than what I already did, here it is:

When including songs from Alladin Sane, we have two ways of making sure the songs make sense and fit in the album: they were either performed during the 1973 tour while Bowie was still using the Ziggy Stardust persona, as was the case with the majority of the songs here, or the songs' lyrics fit in with the (rather loose, to be honest) concept and storyline of the record. That being the case, only a couple of songs from the LP that fit those parameters are not included, most notably "Drive-In Saturday" and "Panic in Detroit", which despite being a dystopian story as well doesn't fit the narrative at all, despite being played live throughout the tour. As mentioned before, all songs from the late 1971 Ziggy recording sessions will be used, but that also means one song will have to be deleted, and that is "It Ain't Easy". As much as I like it, it's from the Hunky Dory sessions and was a bit shoehorned into the tracklist, so it's excluded to make room for the outtakes, which make a lot more sense within the LP. Also on that note, not included are any and all songs that were already released by the time the original ZS album was being recorded, even though a whole lot of songs from The Man Who Sold the World and Hunky Dory that were played back then could fit in with the narrative easily. It just wouldn't make that much sense at all, would it?

Considering that all songs, with the exception of "Rebel Rebel" and "Rock and Roll With Me", were recorded with the exact same backing band and in a similar genre, it's no secret that this reconstruction really sounds and feels like an album, and its track order was arranged to maximize that. I tried my best to keep the original album's tracklist as intact as possible, only sandwiching the new songs in between them, as to fit in with the narrative. Some switching was needed for the sides' length to be balanced, which led to "Starman" and "Star" being swapped, but other than that, the order was kept mostly intact. I sequenced the outtakes keeping in mind both the story and how they fit into it, and how the songs would work within the album's sequence. That led the album's weirdest song by far, "Alladin Sane" to finish side one, for example, as it's the only place it would really fit in. Most of the 1971 outtakes are sequenced on side three alongside the title track and "Rebel Rebel" as they made much more sense separate, while the other three sides have one outtake each. All other Alladin Sane songs and "All the Young Dudes" also are kept more or less on the positions they originally had on the album, as we are already familiar with them.

As for how the new tunes fit in with the story and concept, "Cracked Actor" and "Watch that Man" deal with the decadence and depressing nature of the rock and roll lifestyle Ziggy was so immersed in, and tell of the dark side of fame, something that wasn't talked about as much on the single LP. "All the Young Dudes" tells of the generational gap and personal issues of this fictional dystopian world, and also deals with the news Ziggy and his band were delivering to the people. As for "Alladin Sane" and "Time", those deal with his descent into madness (who will love a lad insane?) and his contemplation of reality and the catastrophic events that will follow in a pretty short while. "Rebel Rebel" and "The Jean Genie" both deal with his androgynous nature and the love and adulation he received from fans and girls alike, with "Rock and Roll With Me" being an extension of that and showing how he and his fans face love and romance. The covers Bowie recorded for the original album, those being "Round and Round" and "Port of Amsterdam", feel like an actual part of the album's narrative and less like an afterthought or filler, as unfortunately was the case with "It Ain't Easy" before, which is certainly an improvement and benefits the album immensely.

As for the four sides' length, all sides clock in at around 22 minutes, which gives us a nice 90-minute album to listen to, as compared to the original's 38 minutes. If you wonder if the concept and the listener really benefit from doubling Ziggy Stardust and adding to its lore, I honestly think that the album really feels much more complete and in-depth than it did originally, and if not better (there are still those that feel that "less is more", and I'm certainly not a part of that group!), it certainly gives the story a complexity and fulfillment it didn't have originally, and we the listeners benefit immensely from that. The album cover is one of the outtakes from the original cover's photo session, which was also colorized and had the album's title added in. Makes for a nice change of pace, doesn't it? For bonus tracks, we can add the live "My Death" and "White Light/White Heat", to be completists, and even consider using "It Ain't Easy" as a non-album b-side to one of the album's many singles, as the tune would otherwise be homeless. Since Bowie's final character retirement almost four years ago, we have been left to celebrate all the great music he's left us, and I feel it's pretty appropriate that were's still discussing his songs and impact by now, while our Lad Insane is gone.

Posted by The Reconstructor at 14:43